Stomach Bugs: Rehydration Drinks, and How to Reduce Transmission!

Are you tired of every medical news story being about the flu? Let’s talk about something different: stomach bugs. Last weekend as I was cleaning my son’s barf out of the floor mats in the car, I thought, “There is a community outbreak going around and this is a timely topic.”

The symptoms that you can get with a stomach bug are variable, but they typically include some combination of feeling pretty bad, potentially having some fever (sometimes kind of high), nausea with varying amounts of vomiting, and diarrhea. Now, if you’ve got horrendous vomiting and you can’t keep anything down, then what I’m about to talk about won’t be of much use to you, because I want to talk a little bit about rehydration.

If you think you are dehydrated, your typical response is to think that you need more water. Well, from a rehydration standpoint, if you’ve got a lot of diarrhea, water is okay, but you’re not just losing water. You’re also losing electrolytes: sodium and potassium and chloride and bicarbonate. Water is going to replace the water but it’s not going to replace the electrolytes. While water is good, it isn’t perfect. 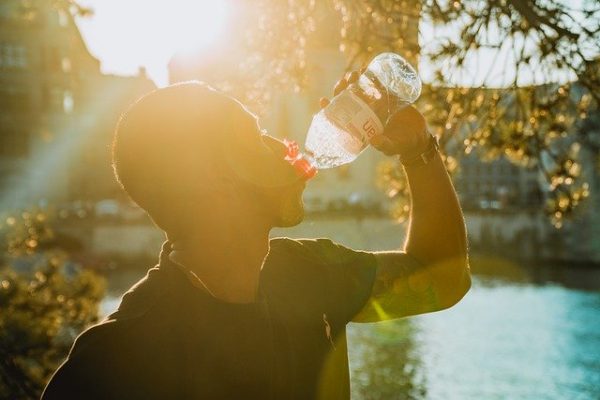 What about ginger ale, often touted for settling your stomach? Indeed, the ginger can sometimes ease the nausea just a bit, but this is basically sugar water, tons of sugar, way more than what’s appropriate for rehydration and really no electrolytes to speak of. So this may be okay for settling your stomach, but it’s not very good for rehydration.

If you go to the pharmacy section, you can get rehydration drinks that are very well developed to match up with WHO recommendations for different constituents. What’s the problem? It’s like drinking fruit-flavored sweat! This stuff tastes terrible and is expensive. It works pretty well but it’s not the most enjoyable thing and it’s not the best thing to pay for.

So what’s another strategy you can use? Well, here is what I often suggest to folks: Using a 16-ounce cup, fill about a third of it with orange juice and the rest of it with water. Then add a little less than a quarter of a teaspoon of salt or baking soda. It’s not quite enough sodium to match the WHO criteria, but it doesn’t taste like you’re drinking a sweaty orange and it’s a whole lot cheaper.

I hope this is useful information. For more videos, check us out at sentinelprimarycare.com. I’m Dr. Patrick O’Connell.